Collection of Weapons and Military Equipment

The Collection of Weapons and Military Equipment is one of the basic collections at the Historical Museum of Serbia. It contains over 700 objects, divided into three parts: weapons of local workshop production, factory-produced weapons and military equipment. The weapons made in local workshops are primarily of Balkan provenance, and date from the 18th and 19th centuries. The most valuable part of the collection are objects from the First and Second Serbian Uprisings, especially those belonging to Karadjordje and other military commanders, as well as other distinguished figures of the Serbian Revolution and creators of the modern Serbian state.

The firearms produced in local workshops are mostly represented by the „arnautka” type of rifle, a flintlock gun with a T-shaped butt (Western European provenance), including all of its variants: the „džeferdar”, „čibuklija”, and „rašak” („krdžalinka”). The „džeferdar” is the most luxuriant, with mother-of-pearl plated butt. The Oriental types of firearms are represented by a rifle called the „shishana”, and its domestic variant, the so-called „paragun”, as well as a flintlock musket called the „tvrdjavka” or „dupovka”. Many different types of pistols are represented in the collection: in addition to the „ledenica”, „šilja”, „prizrenac” and „zlatka”, there is the „kubura” (an old-fashioned type of pistol), produced in Peć, Foča and Shkoder. The shiny appearance of the „ledenica” makes it an exceptional example of elegance among pistols in general – an effect created by the silver plates which fully covered the wooden parts, and the careful decoration (casting and embossing).

A distinct class of firearms consists of several cannons from the period of the First Serbian Uprising, manufactured or repaired in the Belgrade Arsenal between 1811 and 1812.

The sidearms within the collection include the yataghans (with white bone or black ivory grips, and silver-plated), the palash swords, and sabers, predominantly of Turkish (kilij or Mamluk type) and Persian (shamshir) origin.

A special part of the Collection of Weapons consists of military equipment for the cleaning and maintenance of weapons, dating from the 18th and 19th centuries, including cartridge cases (for the keeping and transport of ammunition), oilcans (with greasy tow for cleaning weapons), powder flasks, ramrods, and different types of whips. 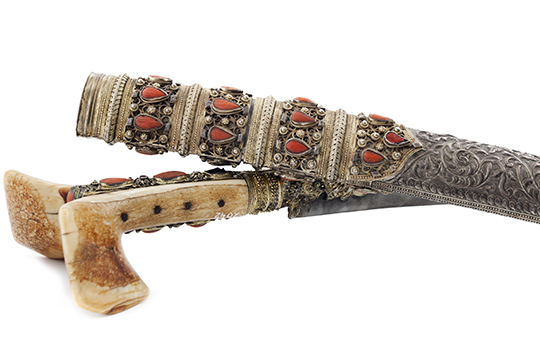 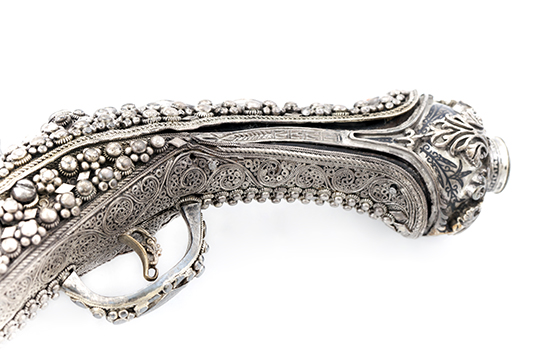 Some pieces of handmade weaponry merit special attention because of their beauty and the variety of techniques employed in the decoration (intarsia with gold and silver wire, marquetry, inlay, niello, engraving, etc.). As the creative expression of a certain period, the motifs and styles testify to the past and the influence which religion had on artistic work and perception. Aesthetically speaking, for their extreme beauty and the matchless skill of the craftsmanship, the yataghans and Oriental swords, as well as of the „džeferdar” rifles, „ledenica” pistols and „Skadarka” kuburas, are especially to be noted.

Another large and heterogeneous part of the collection includes mass-produced weapons closely related to important events of Serbian history: the Serbian-Ottoman War of 1876–1878, the Balkan Wars and both World Wars, as well as the wars which followed the disintegration of former Yugoslavia in 1991, etc. The majority date from the mid-19th to the end of the 20th century, and were used by the Serbian, later the Yugoslav Army; while just as extensive is that part of the collection consisting of weapons used by neighbouring or enemy armies. The firearms include all types of shooting arms – pistols, revolvers, rifles, carbines, machine-guns and heavy machine-guns, and automatic rifles. Certainly, rifles predominate and cover various types and models, including muzzle-loaders, percussion guns, single-shoot and repeating breech-loaders, as well as modern automatic weapons. The mass-produced cold steel arms mostly comprise swords, sabers, knives, bayonets, etc. Of particular interest are officers’ sabers, the heraldry of which enables us to trace various processes in the constitution of the state as well as dynastic changes. The sabers are classified according to which branch of the army used them (infantry, cavalry, artillery) and their provenance (Austrian, Russian, Hungarian, Prussian...). 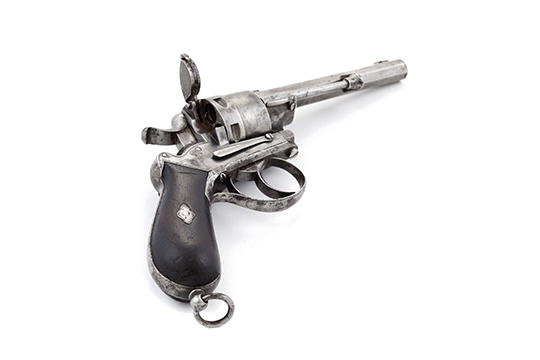 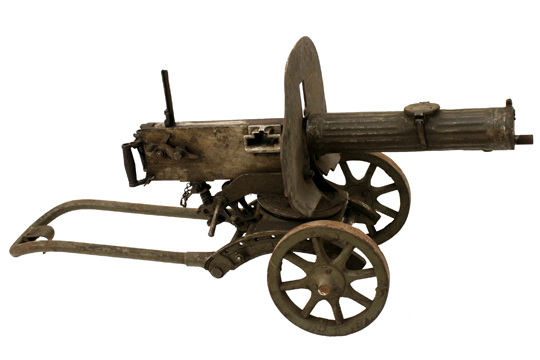 The Collection of Weapons comprises valuable material not only for the study and representation of the Serbian past, but also for a better understanding of the military history of the countries of their origin. As part of the Serbian cultural heritage, these objects indicate the military-technical and socio-economic development of the Serbs in general. The handmade pieces also provide important data on the development of gunsmithing in the Balkans, and the techniques employed in the decoration of weapons, because they were valued partly for their appearance. Of particular interest are copies given to certain important figures as gifts, such as the pair of percussion pistols which the Czechs gave to Stevan Knićanin, the Commander of Serbian volunteer troops in Voivodina during the 1848 Revolution, or the saber of Alexander Obrenović, which was the gift of Karl Grasser, an Austrian weapons supplier, in 1897, or the M51 submachine gun given to General Koča Popović by the „Crvena Zastava” weapons factory on Army Day 1951.