As a complex museum with the task of preserving and enabling communication between the public and the national heritage, the Historical Museum of Serbia collects, preserves, registers and studies materials related to the history of Serbia, maintains and completes the museum collections, as well as the information and documentation on them, and makes it available to the public. In addition, through museum exhibitions it responsibly and competently articulates and interprets the knowledge of the past not only of Serbia and the Serbian people, but also of the other peoples and cultures that have lived and still live in the territory of Serbia from the Middle Ages to the present.

The establishment of the Museum took place in several stages. The first attempt was made in 1950, when the Decree on the Establishment of the Historical Museum of the People’s Republic of Serbia was issued. However, when in 1954 the exhibition dedicated to the celebration of the 150th anniversary of the First Serbian Uprising was moved to the Residence of Prince Miloš Obrenović in Topčider, the Museum of the First Serbian Uprising was established. Its concept revolved around the interpretation of materials related to the First (1804–1813) and Second (1815) Serbian Uprisings as events of extraordinary importance for the Serbian people, as inaugurating the process of the establishment of the modern Serbian state and the recognition of its independence. This indicated that the insurrectionary-revolutionary milieu of the Uprisings was ideologically recognizable and acceptable to the authorities.

Eventually, by the Decree of the Executive Council of the National Assembly of the People’s Republic of Serbia, dated February 20, 1963, the Historical Museum of Serbia was established, out of the need, as it was stated, for „a museum of a general type, which would universally present the rich and colourful history of the Serbian people”. The Museum of the First Serbian Uprising, housed in the Obrenović Residence in Topčider, was incorporated into the newly established museum, and for a long time this outstanding example of Balkan architecture was the Museum’s only display space.

According to its concept, adopted in 1966, the Museum’s primary mission is to collect, register, preserve, handle, study and exhibit materials related to the Serbian people and Serbia from ancient times to the present. Chronologically, the subject matter of the Museum, which covers all the important processes of the development of the Serbian entity, with particular stress on the periods of national liberation, is divided into several parts: the Middle Ages, the period of foreign domination, the period from 1804 to 1918, the period after World War One, the period of the National Liberation War 1941–1945, and the post-war development of Serbia. In this connection, the political, cultural and historical mainstreams had a huge impact: middle-class culture was discarded, squeezed out and degraded, and the cultural achievements of the distant Middle Ages (particularly of the valuable mediaeval architectural and painting heritage in Serbia) emphasized, together with the most recent war and post-war periods of socialist reconstruction, which coincided with the direction of scientific research in the humanities (history, art history, ethnology, archaeology), the results of which are crucial for much of museology. 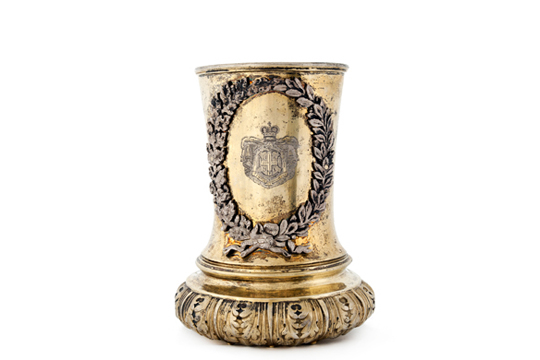 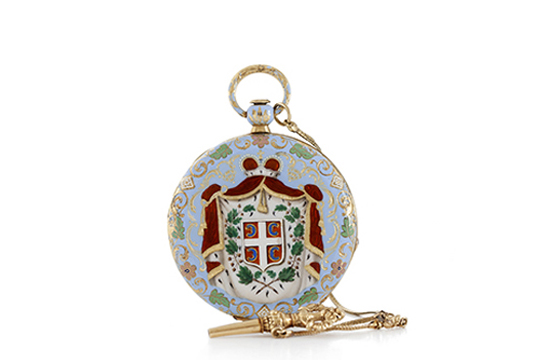 Watch from the Obrenović estate

In accordance with the decree on the competence of the museums with regard to the types of objects and territory, the Historical Museum of Serbia is competent for objects important to Serbian history, including weapons and military equipment from the late Middle Ages (cold steel weapons and firearms, both handmade and mass-produced, and military equipment), uniforms of members of certain professions (military, police, diplomacy, church, post office, customs, public transport, various organizations and associations, including music, fire, sports, hunting, etc.), flags, medals and decorations, memorial objects related to distinguished figures and important events, maps and atlases, mass-produced technical objects, seals, posters, photographs and postcards.

The historical collections at the Historical Museum were formed in full accordance with the Museum’s competence, taking into account, first of all, the different materials the objects are made of, the different conditions of their preservation, but also the easier and clearer keeping of records about them. The originally unique historical collection, which included objects which later become part of the Visual and the Applied Arts collections, was abandoned when the museum fund increased. The Archaeological, Numismatic and Ethnographic collections, the Collection of copies of frescoes and icons, the Collection of Archivalia and of Old and Rare Books, as well as the museum funds of items dedicated to Milutinović and Valtrović, Djordje Stanojević and Jovan Ilkić were constituted as separate entities from the beginning. In recent years, conditions for the institution of new collections have been created, as a result of the realization that the Museum’s concept and its acquisition policy should be expanded to embrace those ideas, phenomena and events that, although significantly influencing Serbian history, have been disregarded so far.

In the first years after its establishment, the core of the Museum’s collections consisted of items that belonged to the Museum of the First Serbian Uprising before it became part of the Historical Museum of Serbia, and which, prior to that, were excluded from the Historical Collection of the National Museum in Belgrade. These were items related to the persons and events of the First and Second Serbian Uprisings (weapons, flags, uniforms, clothing and other utilitarian objects, documents, photographs, works of art). The Museum pursued the same acquisition policy in the following years, extending the subject of its interest to the events of the recent past. Thus, almost immediately after the war in former Yugoslavia, the Museum saw its fund increased by the weapons and uniforms used by members of all parties in the conflict. 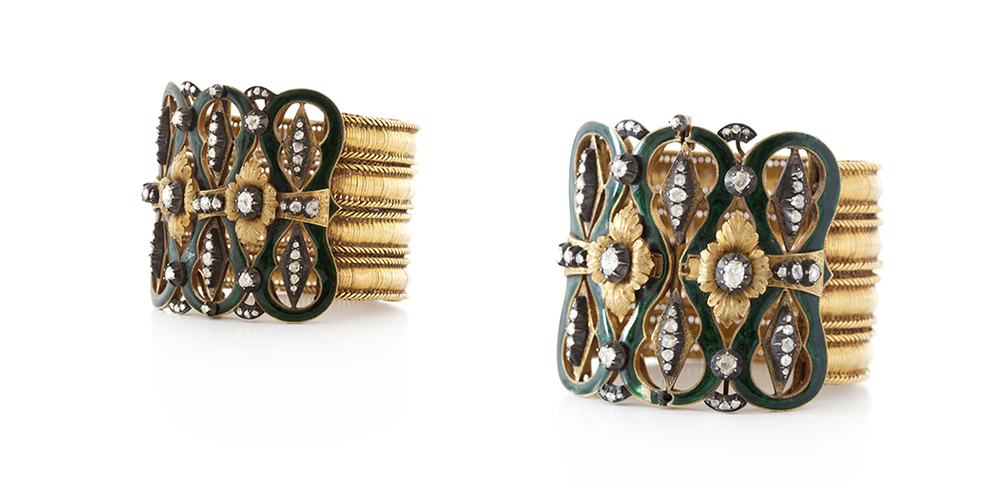 Bracelets from the Obrenović estate

The Residence of Prince Miloš Obrenović in Topčider is part of the Museum. For its construction, plan and style, it belongs to that period of Ottoman architecture and represents one of the last architectural and artistic traces of Ottoman culture in Serbia. It was built in 1831 by the architect Hadži Nikola Živković as the main court complex building.

During its work of more than half a century, the Museum has won respect both in Serbia and abroad for organizing representative exhibitions, which were displayed not only in Belgrade and other places across Serbia, but also throughout Europe and even in the USA: The Obrenović Dynasty – from the legacy (1996), Official dress in Serbia in the 19th and 20th centuries (2001), The First Serbian Uprising and the Restoration of the Serbian State (2004), The Icon – a Serbian spiritual and historical picture (2011), The Silence of Weapons – The Collection of Weapons and Military Equipment at the Historical Museum of Serbia (2012), The Karadjordjević and Obrenović Dynasties in the Collections of the Historical Museum of Serbia (2013), Serbia 1914 (2014), Mihajlo Pupin – from physical to spiritual reality (2015). At the same time, the Museum has also displayed numerous exhibitions from Russia, Germany, Czechoslovakia, Romania, Bulgaria and other countries.

Until 2003, the Museum had its permanent publication – The Review of the Historical Museum of Serbia, the first issues of which (1954–1965) were published by the Museum of the First Serbian Uprising. In 2013, to mark the 50th anniversary of its establishment and work, the Museum published a monograph on the Museum. In addition to catalogues of exhibitions and museum collections, the Museum has also published a number of significant special editions, such as reprints of the Vragolan magazine and of the album Fruška gora, the three-volume publication on Milutinović and Valtrović – Documents and Interpretations, and collections of documents on the Raška region, the suffering of the Serbian people in Serbia during World War One, etc.

For its exceptional contribution to the development of culture in Serbia, the Museum was awarded the Vuk Prize in 1997, and the Michael Valtrović prize by the Serbian Museum Association in 2015, as well as with the Order of Sretenje in 2013. 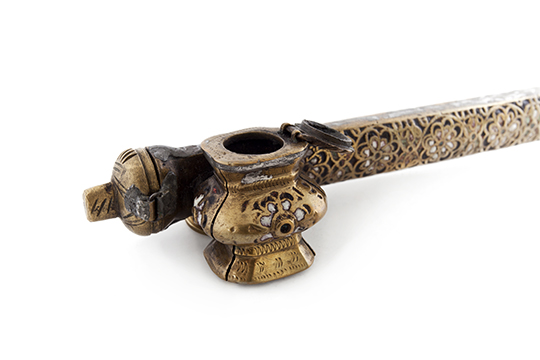 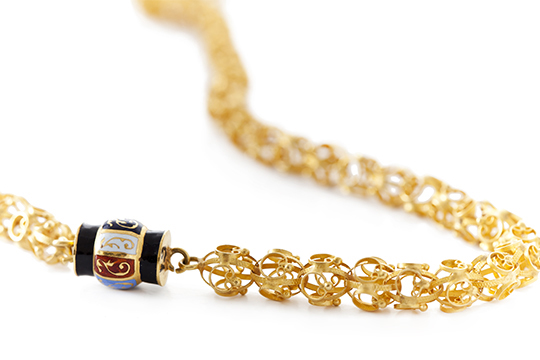 Chain from the Obrenović estate

The Historical Museum of Serbia is among the few Serbian museums which has developed its own information system for documenting/registering museum objects. This was the result of a thorough analysis of documenting systems used by the museums within its competence. The poll conducted among these institutions showed widespread lack of uniformity when it came to the level and quality of documenting/registering museum objects, and terminology and classification.

The introduction of an information system into museum documentation practice and the creation of an electron file for each object have enabled the storage of different information related to the object (photos, texts, audio and video recordings, press clippings, etc.) in one place. Furthermore, this has proved a good basis for the implementation of international standards and classifications, for the standardization of the level and quality of information about the object, as well as of all other parameters necessary for the identification of an object important in Serbian history. At the same time, the creation of such a comprehensive system of cataloguing, i.e. registering of museum objects and keeping records about the processes in the system of cultural heritage protection, has provided complete documentation about each object as a set of information, interpretations and ideas for research purposes, and has made them widely accessible.